Recently, Yaskawa Electric, one of the “Four Families” of industrial robots, announced that it will build a new factory in Japan to produce core components that improve energy-saving performance such as home appliances. The move is to avoid the risk of interruptions in the procurement of parts and components from China in the context of intensifying Sino-US confrontation.

It is understood that, focusing on purchasing parts from China, Japan’s Daikin Industries plans to build a supply chain in 2023 that can produce air conditioners even if there is a war without Chinese-made components. It can be seen that Japanese companies reorganize their supply chains and promote the development of a new industry that is free from China’s dependence. The trend is expanding.

It is worth noting that after 2024, Yaskawa Electric will also increase the proportion of independent production of industrial Robot Parts from the current 40% to 70%, obviously to ensure the timely supply of parts.

Yaskawa Electric stated that the increase in raw material costs and logistics costs during the reporting period became a burden. In order to make up for the shortage of components such as semiconductors, the company purchased components circulating in the market at higher prices.

From a regional perspective, Yaskawa Electric’s business is mainly in Japan, the Americas, Europe, China and other Asian countries. During the current period, except for the Chinese market, revenue has increased. The Americas grew the fastest with 34.8%, and the Chinese market revenue It was down 1.7%, mainly due to previous lockdowns due to the outbreak.

Hiroshi Ogasawara, chairman and president of Yaskawa Electric, said at the financial report conference that “exports are decreasing, and on the whole, they are no longer as strong as before.” In response to the slowdown in the world economy, “there is currently no impact on business.” In response to the prospect, “there will be no rapid cooling of investment”, but it is said that in China, shipments will be partially postponed according to the cash flow of customers. 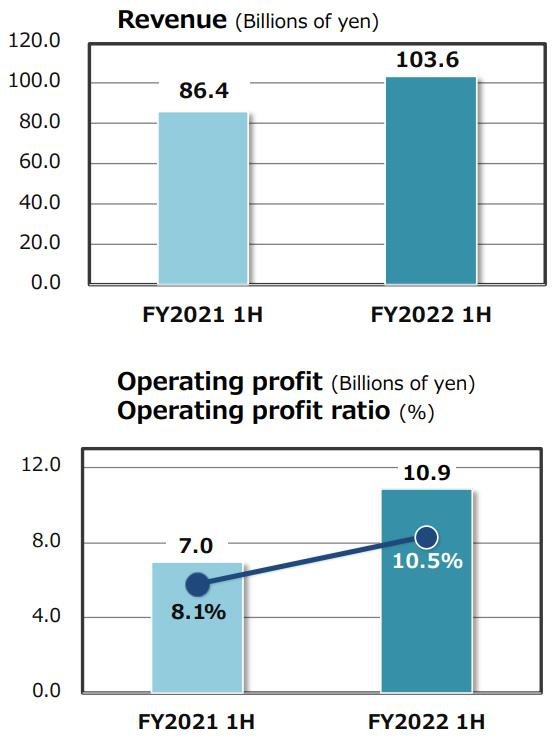 First, in the automotive market, the acceleration of the global application of electric vehicles has continued to expand capital investment in lithium-ion batteries and correspondingly increased sales of industrial robots.

Second, the growing demand in the semiconductor and electronic component markets has driven strong growth in the sales of semiconductor robots.

The third is an increase in investment in the general industrial sector, including the food market, in hopes of upgrading automated production through the use of collaborative robots and other facilities.

From a regional perspective, China is Yaskawa Electric’s largest robot market. In the first half of this year, its shipments in the Chinese market are second only to Fanuc, and its robot business’s revenue in China also accounted for 25% from March to May. , increased to 32% today, mainly because the market was released after the epidemic blockade was lifted.

In order to ensure full-year performance expectations, Yaskawa Electric stated that it will start the construction of a new Robotic machining factory at its Kitakyushu headquarters to increase internal production and added value. Obviously, this is also to improve the independent production capacity of local parts and reduce the need for overseas markets. Procurement dependency.